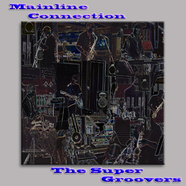 Take a musical trip to many continents with this album: There are many outstanding tracks on the CD from the melodic sax lines and funky groove of "You're The Only One In My Life", the reggae inspired "Right Track Wrong Train to Jamaica" with again great sax melodies, ideal for the summertime, the Afro-Beat influenced "Safari I Can See", the funky groove of "Can Of Bliss Island" with a simple sax melody and a scorching keyboard solo, the retro sound of The Crusaders influenced "Keeping The Past Alive", the Latin stylings of "Villefranche Sur Mer" inspired by a trip to the South of France, "A Cry For Peace" a minor blues with a sax and guitar melodic duet, inspired for a desire for world peace composed after watching the war in the Middle East on CNN, the New Age stylings with a tinge of Reggae of "Walking The Lonely Streets" a song used as background music on numerous TV episodes. Other songs include the title track "Mainline Connection" a bouncy smooth jazz track and "Destinasian" a light flowing funky groove influenced by a trip to Asia. The Super Groovers hope that this album will appeal to many new and current fans.
Reviews of the CD
Played 4 tracks on my Jazz Programme tonight and will be playing the rest in the forthcoming weeks and in the future. After several listenings in peace and quiet and accompanied by a small !! Malt Whisky to set the mood I cannot remember the last time when I enjoyed a recording so much. Without being patronising, this is a superb recording, terrific variation on themes and tempos it leaves the listener eagerly wondering what the next track will bring. Musicianship of the highest quality,bright,innovative, it all moves along at a brisk pace, the arrangements are well defined and thought out and a variety of moods is well encapsulated. I can find no fault with this recording and enormous credit is due to the multiple musical talents of Messrs Gordon and Villafranca, and they deserve every success with this recording. John Reid Keith Radio Scotland

I first became acquainted with sax man Frank Villafranca and keyboard / guitar player Andrew D Gordon back in 2007 when, as The Super Groovers, they released their aptly named debut CD ‘Supergroovin’. At the time I described it as being “a tight collection of eight expansive tracks” and now The Super Groovers are back with the equally eclectic ‘Mainline Connection’.The Super Groovers make an early statement of their smooth jazz credentials with the easy grooving ‘You’re The One In My Life’ yet, truth to tell, from the afro beat of ‘Safari, I Can See’ to the reggae groove of ‘Right Track Wrong Train To Jamaica’, the album rapidly develops into something of a musical world tour. A further sunshine filled stop-over takes in the laid back confines of ‘Villefranche Sur Mer’ while in similar vein is the mellifluous title cut where the interplay between Gordon and Villafranca is at its finest.Elsewhere ‘Can Of Bliss Island’ proves to be an edgy piece of rhythmic funk and although the evocative ‘Walking The Lonely Streets’ is a song that has been used as background music on numerous television episodes, ‘A Cry For Peace’ serves as both a study in reflective blues and a social commentary on the wrongs of war.Memorable moments include the terrific ‘Keep The Past Alive’ where smatterings of Hammond B3 from Gordon really add to the pleasure. Its right up there with the best that ‘Mainline Connection’ has to offer but in terms of personal favorites, and despite its chilled beginning, ‘Destinasian  is a tune that quickly gets on an appealing mid tempo roll and stays there. Dennis Poole www.smoothjazztherapy.com

When I first sat down to listen to The Super Groovers, I thought of arriving at an outdoor concert at a huge venue packed with jazz fans. As I park my car and head for the entrance, I hear this band blaring out some tight and oh-so-funky tune accentuated by a powerful horn arrangement. As it turns out on this smokin’ album, Mainline Connection, the horns are actually overdubbed and one badass cat, Frank Villafranca, is responsible for all of the cool sax and flute action and arrangements.  No matter. The vibe is exactly what it is…dead on and just right for the scenario I just painted.
This CD has it all — funk, reggae, Latin & Brazilian influences, catchy hooks, melody, sass, class, and a load of talent on every instrument.  What’s really impressive is that we’re only talking about two guys and a whole lot of mixing, arranging, and production. It’s truly one of those “You’ve gotta hear this” scenarios.  How they escaped my radar I will never know, but am I ever pleased that I was treated to such a rich introduction as this latest groove displays.
The album begins with the rousing “You’re the Only One In My Life” and never stops to take a breath as it dances through up-tempo and mid-tempo jams alike with equal doses of passion. This is high energy coupled with an apparent knack for feeling what works for the contemporary jazz aficionado. Another very satisfying and well-done CD all around. This is an easy add to your collection and not one you want to miss. – Ronald Jackson thesmoothjazzride.com

The Super Groovers set a high standard for themselves when they released their first CD, Supergroovin’. It would be hard to expect a second Album to be on par. But with the release of their CD Mainline connection, the bar has been raised even higher. It is an eclectic instrumental mix of funk, jazz, Latin, reggae and blues. There are 10 tunes on the album which does not have a mediocre track. The melodies are memorable and the grooves irresistible. My favourite is the title track which would come under the smooth jazz category and there are some nice phrasing from sax and piano. Walking The Lonely Streets is a poignant piece with the flute making the statement. Later the piano augments the mood. Part of it is given a reggae treatment. This tune was written by Andrew D. Gordon who plays keyboards, guitar, bass and drum programming on the album. He collaborates on the other tracks with sax and flute player Frank Villafranca. A Can Of Bliss has a knockout keyboard solo and Keeping The Past Alive begins with nice interplay between sax and organ. Safari I Can See is set to an African beat complete with steel drum cameo. Right Track Wrong Train To Jamaica has a compelling reggae beat and the organ solo is worth listening to again and again. It is a tribute to The Super Groovers’ musical ability that they can wander into so many genres and yet remain faithful to their unique sound. John Holden, presenter of Chill Zone, 2BACR FM 100.9 Australia

The Super Groovers - Mainline Connection 3/3 (Performance/Sound. 5 max on each) O's Notes: The Super Groovers are Frank Villafranca (sax) and Andrew D. Gordon (keyboards, g, b, programming). They have a cool Caribbean vibe mixed with a touch of old school rhythms that is relaxing. The duo handle most of the melodies on sax and piano, a fine example of 1+1 = more than 2! -- D. Oscar Groomes O's Place Jazz Magazine http://www.OsPlaceJazz.com 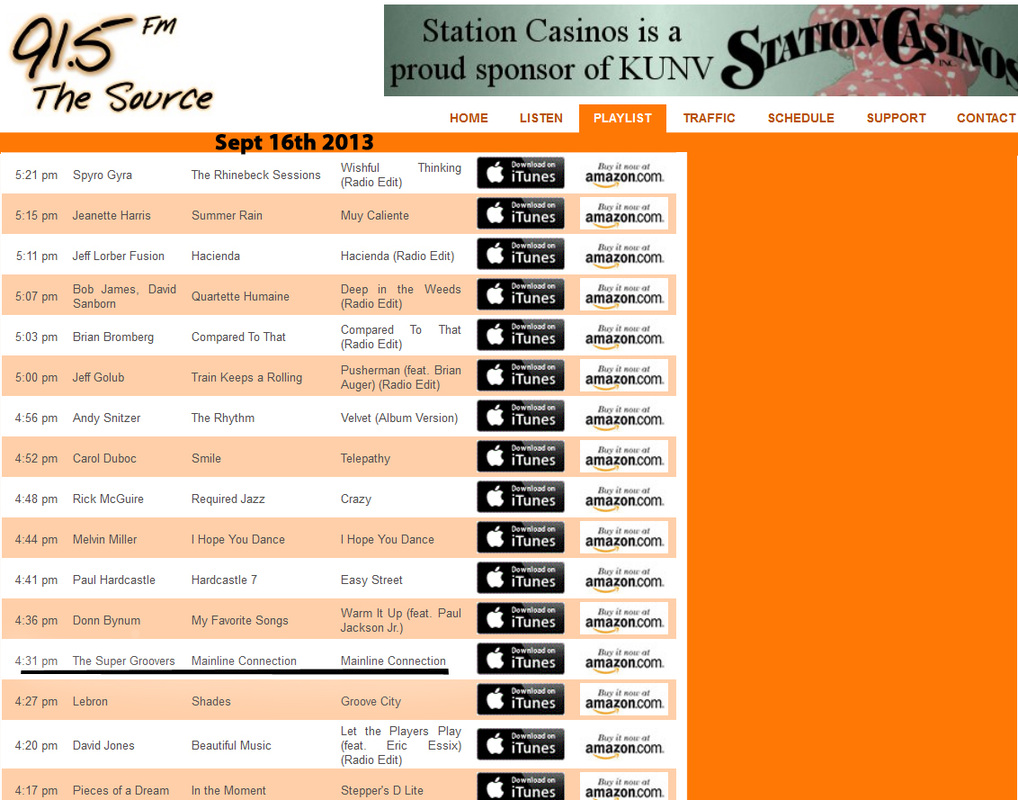